All Blacks Go 5-Up With Win Over Argentina 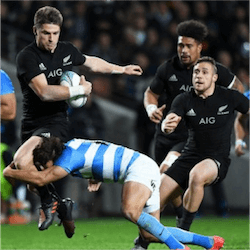 The All Blacks proved their dominance yet again with a massive 36-10 win over Argentina in Buenos Aires this past weekend. New Zealand had already won the Rugby Championship title before they even stepped onto the field as South Africa and Australia played out to 27-all draw in Bloemfontein, giving the All Blacks an unassailable 6-point lead.

Having defeated Argentina, New Zealand are now the only team to win all five of their tests and hold an impressive 11-point lead over South Africa in second place with just one round to go. The World Champs were quick off the mark, scoring four tries in the first half to rack up a 29-3 lead at the break. But it was not all good news for coach Steve Hansen. After cruising through the first half, the All Blacks went scoreless until newbie David Havili scored the fifth and final try as the clock ran out.

According to Sonny Bill Williams, New Zealand didn’t give Argentina enough respect in the second half and paid the price. Meanwhile All Blacks captain Kieran Read scored a duo of tries before being sin-binned by South African referee Jaco Peyper in the second half. It was one of four yellow cards dished out during the match. Matt Todd, the All Black flanker was also on the receiving side of the whistle, being blown up for collapsing a maul.

Putting aside the niggly mistakes that swept through the game, New Zealand produced some brilliant plays in the first half. Beauden Barrett in particular, produced two moments of what could only be described as pure magic. Standing in for Lima Sopoga who was attending the birth of his first child, Barret wasted no time, making quick line breaks and providing a beautiful pass for Waisake Naholo’s try in the first half.

Barret was also instrumental in providing Damian McKenzie a tunnel ball leading to Read’s second try. McKenzie was able to run over his own try later in the match, taking a quick tap and finding a gap. Speaking to the press after the match, Read said that he was happy with his team’s ability to defend. The two yellow cards didn’t help, but they were able to keep them out. He added that it was good for the less experienced players to play in one of the toughest atmospheres in world rugby.