All Blacks May Get Bitten by the Lions 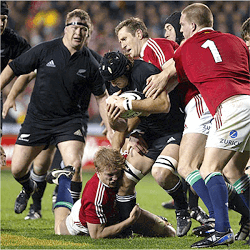 The Lions Pose a Real Threat to the All Blacks

Are the All Blacks shaking in their boots at the thought of the trouble the Lions may be bringing? It has been a very long time since the extraordinarily strong New Zealand team have faced any real apprehension as to whether or not they would return from a bout at Eden Park triumphantly, thanks to the fact that for 22 years now they have not lost a single one.

Their consistent success at their chief test-match venue may well have resulted in an understandable level of complacency, but things could be set to change really soon…

The Kiwi team, strong as they undoubtedly are, do, however, definitely have something to worry about. The Lions have stepped up, which is heartening news for spectators everywhere, and, with the Lions coaching team being announced tomorrow, with Steve Borthwick; Rob Howley; and Andy Farrell in the box seats, the squad selection looks promising.

The series of matches that took place in the European autumn has revealed a number of serious contenders, from English wing Jonny May; to Irish prop Tadhg Furlong; and not forgetting Scottish centre Huw Jones, all of which would not have appeared on anybody’s list back in October.

The All Blacks’ Achilles heel is possibly their second row duo, as was obvious when both of the team’s established incumbents, Sam Whitelock and Brodie Retallick, were injured when the match against the Irish in Chicago was set to take place.

As far as the Lions are concerned, there are a number of very strong players to choose from as far as their second row forwards are concerned: Maro Itoje (despite the fact that he was not present for any of the autumn series games, his excellent reputation stands strong, and he would be a formidable figure in the second row were he chosen); George Kruis; Courtney Lawes (Lawes has been playing the best rugby he has ever played);  and Joe Launchbury (who is also playing excellently) are all options, and these players are just the options from England! When you factor in the Scots, in the form of the Gray brothers; Alun Wyn Jones and his Welsh partner Luke Charteris; and the Irish players Devin Toner; Iain Henderson and Donnacha Ryan, it becomes clear just how deep the pool of first-rate players in the second row that the Lions have the luxury of choosing from is.