All Blacks Ready for World Cup 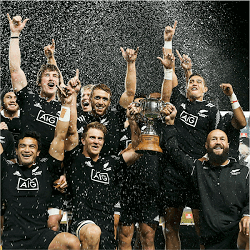 Stage Set For Stunning All Blacks Side

All Blacks captain Steven Hansen is walking tall after re-signing the stellar young prop Owen Franks back into the New Zealand fold. There was a lot of international interest in Franks who will soon become one of the most capped props in history.

His contract has signed Franks up until after the 2019 World Cup. Re signing Franks was just the first step however in securing a solid world cup team.

Many other star players have their end of contract coming up in 2017 which means that the future All Black team is in no way set in stone.

New Zealand Rugby has already set aside over 20 Million NZ dollars to ensure that current star players will remain on the team until 2019.

Currently players like Israel Dagg, Aaron Cruden and Ben Smith have all been tipped to be interested in greener financial pastures in Europe. Hansen is confident however that they can make very competitive offers to their players and keep the current team stable.

If they remain on the team, Sam Whitelock and Kieran red will be facing a possible third world cup victory.

Kieran Read is also in talks to take a sabbatical year in 2018, only appearing for tests and key matches. Hansen has said this is to keep their best players as fresh as possible and prevent burn out.

The All Blacks will be meeting up in January after their November tour in order to get their minds focussed on the year ahead.

The All Blacks will be entering a conditioning and wellness camp in order to prepare for the visit from the Lions midyear.

With the higher additional spending that is required to keep on key players, New Zealand Rugby will certainly have all eyes on coach Hansen. The team will definitely be held up to a high standard with the nations hopes and the NZR’s long term investment in the team.

The resigning of Franks is a good sign of the mindset of the rest of the team, with all hands on deck to secure another world cup crown.

The coaches and the team seem to have full confidence that the All Blacks team will remain unchanged for the next two years. The quality of the team in 2016 can only go downhill as they have proven to be an incredible force in the world of rugby with potential world cup glory on the horizon.