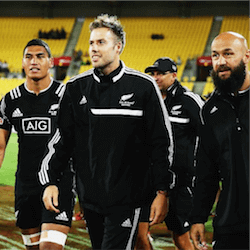 South Africa may have won their second World Series title, but that didn’t stop the All Blacks sevens from celebrating a return to form with a bronze in Paris. All the unforced errors and discipline issues that plagued the team for much of their 2016-2017 campaign seemed a distant memory when the All Blacks sevens took to the field in France.

New Zealand got off to a rocketing start, going completely unbeaten on day one in an extremely competitive pool. They even managed to pip France in front of their home crowd in a nail-biting Cup quarter-final. When they got to the semi-final, the All Blacks sevens had the misfortune of meeting up with South Africa who were cruising to yet another tournament win. The Blizbokke were slightly less formidable than in the first half of the series but still pulled of a brilliant display to knock out the New Zealand side.

With England falling to Scotland in the other semi-final, South Africa claimed the World Series title before the match even began. Perhaps it was the euphoria or New Zealand’s wilful determination that led to the kiwis striking first. This time it was Regan Ware doing the honours, finishing off a brilliant break from Joe Webber. However, two second half tires by South African Rosko Specman put any hope of a New Zealand comeback beyond doubt.

In the bronze medal final, New Zealand played some classy rugby, equalling their best effort for the 2016-17 season and snatching third position from the English side. This time it was England who scored first, leading 5-0 at the break. A well-timed kick-pass by Jamie Booth led to Sam Dickenson putting the first points on the board for New Zealand. Another solo sprint by Sherwin Stowers allowed the All Blacks sevens to claim the bronze.

In the final, South African went on to defeat Scotland in a rematch of day one. They pipped the Scots 15-5 to claim the Cup final and solidify their place as ultimate leaders. The Bitzbokke now have an unassailable lead in the competition, a full 34 points ahead of England with just one leg to go in the series. Fiji sit three points back from England and could possibly leapfrog them in London. New Zealand made up a lot of ground on both Fiji and England but the gap is a bit too wide for the All Blacks sevens to hope for third at the conclusion of the series in London.