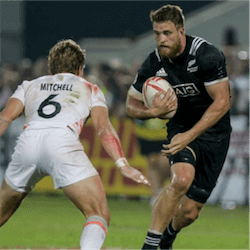 After a strong start, the All Blacks Sevens have picked up fourth place in the Las Vegas leg of the Sevens World Series competition. Battered by a very physical USA team, the All Blacks will be disappointed with their final result. The team showed great promise when they defeated England in the Cup Quarter-final and again in the first half of the semi-final against Fiji.

Having eventually lost the semi-final to the defending champions, New Zealand were pitted against the hosts for the bronze medal match. The USA looked particularly fired up and were always going to be a hard team to beat. From the start, New Zealand never really looked in control and conceded an early try to Maka Unufe. Tone Ng Shiu got a start while Ambrose Curtis came in for Vilimoni Koroi who was recovering from an injury.

With the nerves stating to take hold, the team looked even more lost and were dealt a further blow when Dylan Collier was yellow carded for a high tackle. The All Blacks Sevens were able to peg it back a bit with brilliant try courtesy of DJ Forbes and Tim Mikkelson. Their momentum continued as Sione Molia ran through the USA defence for an inspired solo try to give New Zealand the lead at 15 points to 14. The USA were quick to hit back though and scored again with Andrew Durutalo doing the honours from a quick tap and go.

All to Play for in Vancouver

New Zealand were not able to come back from the try and USA held on to take third place in front of their home crowd. Placing fourth in Las Vegas puts New Zealand in fourth position in the World Series standings. They will be looking for a win in Vancouver this weekend where they enter as the defending champions. It has been a full 12 months since the All Blacks won a victory on the circuit with most of their games being lost by a very small margin.

The Cup Final in Las Vegas saw South Africa take on Fiji. The defending champs fought well but were eventually pipped by an unstoppable South African team who claimed their fourth straight title in five events. South African now lead the World Series by a massive 24 points, miles ahead of anyone else at the half way stage.