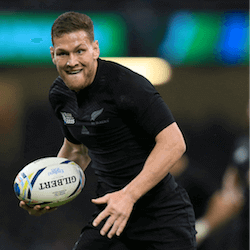 If you haven’t’ noticed by now, there seems to be a trend happening with the New Zealand rugby team. Players who have not been picked for a spot on the All Blacks starting line-up are taking their talents elsewhere. This week it was All Blacks halfback Tawera Kerr-Barlow who announced his decision to head overseas. After failing to book a spot with the All Blacks, Kerr-Barlow announced that he would be making the move to France’s La Rochelle rugby team.

Stade Rochelais (Le Rochelle) is a rugby union club based in La Rochelle in the New Aquitaine region of France. The club has a long and distinguished rugby history, having been founded in 1898. They compete in the top 14 competition where they are the current leaders, a full 10 points ahead of their nearest rivals Montpellier. Kerr-Barlow announced that he would join Le Rochelle for a period of three years after completing the Super Rugby season at home for the Chiefs.

Luatau and Cruden Make Their Move

In New Zealand, Tawera Kerr-Barlow played a total of 25 tests for the national side since his debut in 2012. Of the 25 tests, 23 of his test appearances were made from the bench. Despite making a brief appearance in the 2015 Rugby World Cup, Kerr-Barlow has never really become a first-choice player. As it stands, Kerr-Barlow is behind both Aaron Smith and TJ Perenara for the position of halfback for the All Blacks.

With him being so low down on the pecking order, Tawera will probably not be considered by the All Blacks selectors when playing overseas. The 26-year-old’s departure from New Zealand rugby will be a major concern for All Blacks Coach, Steve Hansen. For Hansen, the loss of a player with a proven performance record will certainly affect the depth of his squad. Like Kerr-Barlow, a lot of other All Blacks players, especially those on the edge of selection are signing lucrative overseas club contracts.

Rather than stick around and fight for international selection, players are choosing to leave before their test careers are close to being over. Coach Steven Hansen has expressed his frustration with the growing trend and spoke out when Steven Luatau made the decision to join Bristol at the age of just 25. Fly half Aaron Cruden at age 28 will also be leaving New Zealand shores to join Montpellier after being leapfrogged by Beauden Barret.