Blues Crushed at State of Origin 3 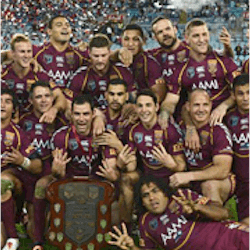 The Queensland Maroons left both fans and the press stunned by an incredible victory over the favourites, New South Wales. Suncorp Stadium came alive as their hometown heroes crushed the Blues 22 – 6 in a show of strength, dedication and spirit.

A rendition of Wish You Well by Bernard Fanning in honour of Jonathan Thurston set the tone for the evening. With a packed stadium you can’t help but feel it is the Maroons fans that came out in droves to support their underdog team that played the biggest role the evening. You would not be mistaken but you also will be selling the team short. The Maroons were in amazing form.

With replacement rookie, Valentine Holmes, the team had their try scorer who sealed the Blue’s fate. He earned Queensland 3 tries with support from the team captain Cameron Smith, whose experience helped steady the team in their hard fought battle.

The Underdogs Rose Up

After their dominating performance in games 1 and 3, the Blues were a shoe in for this game, but the Maroons had other plans. They managed to expand the game across the field in order to weaken the roles of the Blue’s strong forwards, but when they did assert themselves the Maroons simply bashed them back. Their attack also helped put pressure on the deadly kicks of Mitchell Pearce.

Despite the Blues being able to taste victory after years of defeat and despite the decimated Maroons ranks, something just clicked in the team and drove them to victory. There were definite sloppy plays from the Blues but that alone would not have been enough to secure such a commanding victory.

The Maroons scored their first try a mere 14 minutes into the game. Billy Slater managed to confound the Blues defence. With assistance from Michael Morgan a neat pass to Holmes found its mark behind the try line. After 26 minutes in, Cameron Smith, Josh Papalii and Holmes again found another try through teamwork and support.

The final try sealed the game in spectacular fashion. One hour in, Munster powered his way past three of the Blues defensive players before he passed to Holmes. At first the pass seemed too high but with a few well-placed slaps, Holmes managed to gain control of the high ball as he dived across the try line for the final nail in the Blues coffin.