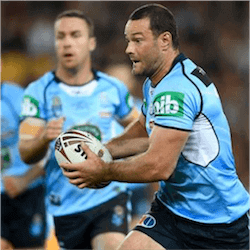 Blues Favourites For State Of Origin

The State of Origin game 3 will see the Blues face the Maroons once gain. The last time New South Wales faced Queensland in an Origins decider, the Blues took a painful 52-6 pounding. The event has been burned into the minds of many players, most of all into the mind of coach Laurie Daley who may be staring down his last year with the team.

The Blues squad is also entering the decider with a bruised and battered team including a calf injury for Captain Boyd Cordoner, an ankle injury for James Tedesco and a knee injury for Josh Dugan. Despite these issues it seems the bookmakers are full steam behind a Blues victory on Wednesday.

It seems that the team could utilise their desperate state to drive home the victory in front of an away crowd. In their previous games, the Blues have performed great so expectations are certainly high.

Fresh Players In The Line-up

The Blues have seen some fresh faces added to their line up including the Dragon’s forward Jack De Belin, Trent Merrin and Matt Moylan, helping to boost the strength of the Forward squad. This strength in the middle of the field is what most likely will drive the Blues all the way.

If there is any issue that may come up it will be the mental strength of the team. On many previous occasions the team has lost focus when the scores are not in their favour by half time. If the coach keeps the guys motivated and driven the game will be theirs.

The Challenge For The Maroons

The Maroons have been giving it their all but they will be facing many challenges in game 3. The most glaring problem being the loss of Jonathon Thurston. There were rumours that the retiring player will be given a victory lap in front of his home crowd before the game kicks off but those plans have been scrapped and instead the player will get a special presentation in his honour.

Whether this will be a demoraliser for the Maroons or whether it will give them more to fight for is yet to be seen. Thurston always had massive impact on each Origins game he played in so the repercussion of his retirement will definitely be felt on the night.

Even though the blues are heading into the game as confident as they were in game 2, this time they will have everything to prove and the hungry squad to prove it with.