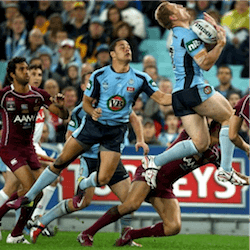 State of Origin – Blues Remain Confident of a Win

Despite losing the State of Origin Game II in the last few minutes to the fired-up Maroons, the post-match statistics suggest that the Blues should have won. In fact, a quick review of the match should give the team the confidence they need to go out and win the decider. New South Wales made more meters in the game, missed fewer tackles, produced more offloads and forced more dropouts than the Maroons from start to finish.

If you look hard enough, you will find that all the stats swung in favour of the Blues except for three; albeit the most important three which determined the outcome of the game. What did go wrong was the Blues ended with more errors than the Queensland side and conceded more penalties. Together, this allowed the Maroons to claw their way back into the game and level the series.

Whatever momentum and hard work was done in the first half was completely undone after the break. A few costly errors and a 3-0 penalty count gave the Maroons the chance the needed to play themselves back into the match.  To be fair, it was not just a loss of concentration from New South Wales that swung the game. Credit has to be given to the Maroons for their sheer doggedness and grit until the dying minutes of the game.

The Path to Victory

New South Wales knew they needed a high score to wrap up the series. Interestingly enough, it was their drive to push the scoreboard that resulted in the team’s downfall. Driving for more points, the Blues made several poor attacking decisions, which resulted in a turnover ball and a momentum swing. Speaking to the press, Blues Lock, Tyson Frizell said that the team didn’t want to just hold the lead. They wanted to continue playing footy and score points while they could.

He admitted that his team gave Queensland a few lineouts, which helped relieve the pressure and allowed them to push forward. In the end, NSW gave the Blues too many opportunities to score, which they gladly accepted and turned into a brilliant comeback. The good news for New South Wales fans is that the Blues will take all of this into account when planning for the third and final game. In a way, the loss to the Queensland has been good in that it will force the Blues to rethink their game plan and bring something special to the decider.