Bookies Back Boks over Wallabies 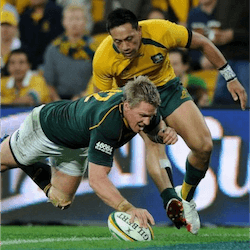 With New Zealand almost unassailable at the top of the 2017 Rugby Championship ladder with 19 points, and likely to clinch the tournament in Argentina next Saturday, Kiwi online sports betting fans will be more interested in the battle between the Wallabies and the Springboks for second place.

It’s a good bet that Australia can beat Argentina in the final game of the tournament in two weeks time, while highly unlikely that South Africa can pull off a victory against New Zealand that week, even in Cape Town. With only three points separating Australia on 8 from South Africa on 11, next Saturday’s Wallabies-Springboks encounter in Bloemfontein will decide second place.

Online betting sites are not giving Aussie punters a great deal to be optimistic about. South Africa are odds-on across the board, at $0.45 and under, while the Wallabies are offered at $2.00 and up. Some bookies are predicting a Springbok win by seven points or more. But bookies have been wrong before…

But then came the draw in Perth, which was practically a home game for the Boks. Suddenly, a revived Wallabies side was poking holes in the Springbok defence and shutting down their attacks, fighting back doggedly after every South African score to claim a well-deserved draw. Suddenly, punters remembered that those French sides were decidedly below strength, and how the Boks had struggled to subdue the Pumas when playing away.

After last Saturday’s 57-0 humiliation in North Harbour, when the All Blacks went through the Boks’ defence like tissue paper and the South Africans simply could not cross their opponent’s line, things are looking rosier. The Wallabies took a solid win against Argentina last week, and they’ll be feeling a lot more confident about next Saturday’s game than the betting suggests.