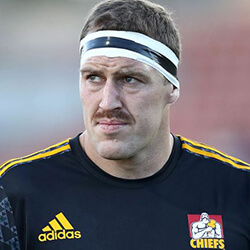 Brodie Retallick, a former World Rugby player of the year, has recently inked a new deal with New Zealand Rugby that will see the player taking a break from the All Blacks. The 28 year old will be leaving New Zealand after the World Cup later this year to play a total of two seasons in Japan, which will also included an extended family break.

The player will be returning to the All Blacks set up in May of 2022 and will remain with the team until the World Cup that is set to take place in 2023. Retallick told reports that he made the decision to give his body a break, adding that he was grateful to have been given the chance to head to Japan and experience not only the rugby but for his family and to be part of a different culture. He continued, saying that he has been playing rugby with the Gallagher Chiefs and the All Blacks since 2012, and while he has enjoyed it and his workload has been well managed, he has decided to give his body a break from the New Zealand game.

The All Blacks, like the English team, have a policy of not selecting players who have moved overseas to play club rugby. Steve Hansen, All Blacks coach, told reporters that Brodie will no doubt be missed; it gives future coaches the chance to build more depth into playing sabbaticals.