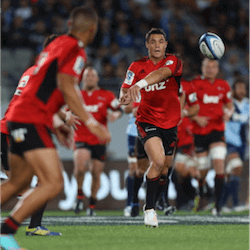 The Crusaders broke a five-year Super Rugby hoodoo on Sunday, beating the Waratahs in Sydney for the first time since 2012. Sam Whitelock’s men outpaced and outclassed the Australian side to make it 19-10 at the break, and despite a gutsy ’Tahs counter-attack in the second half, three more tries left the visitors with six overall and a 41-22 victory.

The bonus-point win returned the Crusaders to the top of the overall tournament ladder with 26 points, after briefly being usurped by the Chiefs, Lions and Stormers on Saturday. Six matches in, the Canterbury side remains undefeated, and their win in Sydney also wrested back the top spot in the New Zealand Conference from the Chiefs.

Also undefeated so far, the Chiefs are back to second in the New Zealand Conference with 24 points. In the Africa 1 Conference, the Stormers are unbeaten too, with 22 points, but like the Chiefs, they have a game in hand.

In fact, the two sides will play their sixth match of the 2017 tournament against each other, at Newlands in Cape Town this Saturday. The Crusaders and their fans, enjoying a bye week, won’t want to miss this match. A Stormers win will take them to the top of the overall rankings, while a Chiefs victory would see them take the lead in the New Zealand Conference as well as the tournament.

Sharks vs Jaguares an Important Clash

The other powerhouses of 2017 Super Rugby capturing the attention of punters are the Johannesburg-based Lions, currently topping the Africa 2 Conference with 23 points from five wins in six games. However, they also having a bye week, which could leave them tied at the top of their conference.

Argentinian side the Jaguares, with four wins from five, and South Africa’s Sharks, on four from six, are currently tied on 18 points. They meet on Saturday afternoon at King’s Park in Durban, and a five-pointer for either side will make them serious contenders against the Lions in coming weeks for the top spot in their conference, and a guaranteed place in the quarter-finals.