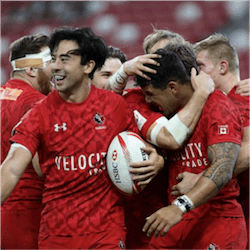 One of those was a rare victory for New Zealand over South Africa in the play-offs, after both had been defeated in the quarter-finals. The All Blacks Sevens’ 17-12 win secured them fifth place in the Singapore Sevens, so they stayed fourth overall on the series ladder with 110 points.

Two QF upsets were delivered by the USA, with a hard-fought 24-19 win over Fiji, and Australia, coming doggedly from behind to beat the Blitzboks 19-17.

Canada shocked punters in their QF by outscoring New Zealand four tries to two, to win 26-14. Nathan Hirayama was on fire, scoring a hat-trick of tries, but Scott Dickson’s second-half yellow card did New Zealand no favours either.

Canada went on to beat England in the semis by an impressive 17-5, after England, third on the series ladder, barely scraped through their QF against Kenya with a final drop-goal after the hooter to win by one point.

After dispatching Fiji in the QF, the USA Eagles took an even more impressive semis win, beating Australia 40-7.

In the final, Canada started off in control, racking up a fast 19-point lead, but the Eagles launched a surging counter-attack and scored an unanswered 19 points to equalise. With less than two minutes to go, Canada’s Lucas Hammond went over for a try, giving Canada a 26-19 win and their first WR Sevens cup ever.

Despite the QF knockout, the All Blacks Sevens side went on to beat Kenya 24-21 in the play-offs, then the Blitzboks for fifth.

South Africa still leads the series ladder on 157, with Fiji on 132 and England on 130. But with the USA on 101, Australia on 94 and now-dangerous Canada on 76, any more surprise upsets in the series could shake up the ladder.

The last two HSBC WR Sevens Series tournaments, in Paris from 13-14 May and Twickenham’s London Sevens from 20-21 May, are thus set to give New Zealand punters lots of attractive betting options.