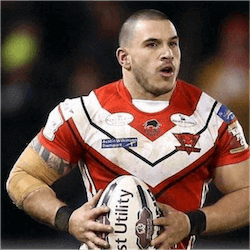 An unfortunate incident occurred during the recent NRL’s Red Devils and Wolfpack match. Justin Carney could be facing an 8 game suspension after throwing racial slurs at the Wolfpack’s Ryan Bailey.

During the match between Salford and Toronto, the Red Devils went home with a 29-22 victory. This is despite Carney being sent off for 26 minutes following the incident. He received a red card after alleged racial abuse was directed at Ryan Bailey. Greg Johnson, Kris Welham and Gareth ‘O Brien secured the victory for the devils after they each scored tries in the game.

The Devils announced after the match that they will be launching their own personal inquiry into the matter. They will be speaking to Carney and asking him to explain his behaviour. Additionally the RFL review panel has charged Carney with verbal abuse based on another players’ race or colour.

Carney can potentially be facing an F grade offence charge, which means the maximum penalty of an 8 game ban. Another potential repercussion against the player could be a suspension based on a fixed time period

A formal tribunal hearing Carney’s case was set to happen in Leeds. The player would have been present but is not able to enter an early guilty plea.

The tribunal was adjourned on request of the Red Devils. They will keep Carney on suspension for Sunday’s upcoming game against Widnes.

So far most members of the Red Devils have declined to offer any comment until the tribunal has completed their investigation. Until then Carney will remain off the field.

Carney has previously played with the Sydney Roosters, Castleford Tigers and the Canberra Raiders.

He had a 5 year contract with the Castleford Tigers and played with the Red Devils as part of a loan contract which became a permanent move in 2016.

These recent events follow shortly on the heels of another racial incident in the world of tennis. Last week the tennis hall of famer, Ilsie Nastase was handed a suspension by the ITF after similar racial slurs and sexist remarks aimed at the British Woman’s Tennis team while they were facing Nastase’s Romanian team.

His racial slurs were directed at 23 time Grand Slam winner Serena Williams regarding the potential colour of her as yet unborn baby.