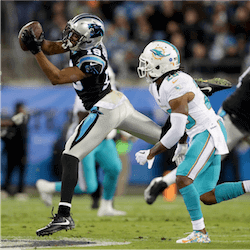 Panthers Take Down the Dolphins in Charlotte

On a night when records were broken for offence, the Carolina Panthers pulled off a couple of big touchdowns and a total of five possessions to defeat the Miami dolphins by 45 points to 21. While the Panther’s defence was the star of the show early on in the game, it was their offence that capitalised on every opportunity, eventually racking up six touchdowns and a total of 548 yards, which just happens to be a franchise record.

A second quarter interception by Luke Kuechly put the Panthers up just before the stroke of halftime. With less than a minute left on the clock, the linebacker was in the perfect position to intercept a pass that was meant for Dolphins tight end Julius Thomas. He then picked off Jay Cutler for the turnover. Four plays and 20 yards later, Cam Newton threw a touchdown pass to Ed Dickson taking the score to 17-7 at halftime in favour of the Panthers.

In the second half, the Panthers opened the floodgates and the offence seemed unstoppable. Carolina increased their lead early on in the third quarter with a screen pass which turned into a 28-yard touchdown to Devin Funchess. On the resulting drive, running back Johnathan Stewart played two handoffs making up a combined 23-yard play. His counterpart, Artis Payne, then made up 12 yards for his very first touchdown of the new season.

Halfway through the third quarter, Miami picked up the pace and pulled off a thrilling 66-yard touchdown courtesy of running back Kenyan Drake. The moment was short lived though as Newton matched the play in the very next possession. Newton showed his adaptive skill with a 69-yard rush, which set up a 2-yard touchdown pass to Christian Mcaffrey. This ended up being his first double touchdown game of his career.

In the fourth quarter, things went according to plan for the Panthers. Newton found Funchess again with another brilliant 32-yard touchdown pass, marking the first four-touchdown game for Monday Night Football. Newton now goes 5-1, having thrown multiple touchdown in all of his six appearances. The win over the Miami Dolphins puts the Panthers on an improved 7-3 for the season. They now trail the New Orleans Saints by just half a game in the NFC South as they head into their bye week.