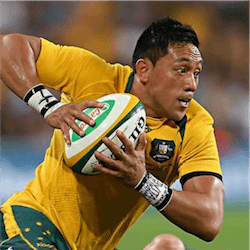 Christian Lealiifano will be making his first Super Rugby appearance since being diagnosed with leukaemia almost 12 months ago. The 29-year-old Brumbies star is set to play in the quarterfinal against the mighty Hurricanes on Friday night in Canberra. Lealiifano was set to make his return to Super Rugby two weeks ago, but picked up an injury to his hamstring on the eve of his scheduled return match.

Speaking about Lealiifano’s proposed return, Brumbies coach, Stephen Larkham said that he was happy to bring the Wallaby back into the side, despite the fact that he has spent most of the season out of play due to his illness. According to the coach, Lealiifano simply needed to get through Monday’s training session to be named in the line-up for the match against the Hurricanes. Larkham said that his inclusion was in no way a gamble. He said that if he thought Lealiifano wasn’t right to play, the team would not be considering him.

According to Larkham, Lealiifano has trained well over the last three months and is in perfect shape for the match. After resting a full 10 players for their last game, the Brumbies are all set to bolster their ranks with some big names.  Chris Alcock and Rory Arnold are expected to have recovered from minor injuries while Allan Alaalatoa and Tevita Kuridrani will be feeling fresh after having a full week off.

In a statement to the press, Larkham said that he would have preferred to have drawn the Chiefs in the quarter final, despite having lost to them in the regular round 28-10. Larkham believes that the Hurricanes are definitely the front running New Zealand team after they gave the Crusaders the first loss of their season this past Saturday.

Meanwhile, the Brumbies haven’t been able to topple a New Zealand team since the beat the Hurricanes in the opening round last year. Larkham believes this will not be a factor come Friday. He went on to explain that this is a new season and all previous matches are irrelevant. He said that he is happy with the way his team has prepared for the final and the fact of the matter is, that it all comes down to this one game.