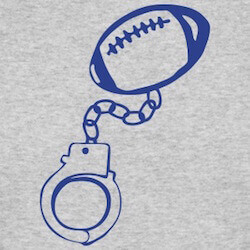 The recent arrest of Ali Williams and James O’Connor has again drawn attention to cocaine in connection with the sport of rugby. The two men were put in handcuffs outside a Paris nightclub. O’Connor was found to be in possession of 2.4 grams of cocaine, and Williams in the act of purchasing cocaine. This is not the first time ruby players have been caught red handed with the notorious white powder.

Williams is one of many former All Blacks players who made the move to France, now playing for Racing 92, based in Paris. Naturally Williams will no longer be getting put forward for any games. O’Connor, a previous Wallaby player, was also put under immediate suspension.

Many are saying that the use of cocaine is an already serious and known problem in the high stress world of professional rugby. French medical expert and advisor to AFLD, the French Anti-Doping Agency, Xavier Bigard, stated that cocaine gives an artificial boost to rugby players in many aspects. The drug is known for heightening levels of awareness, and artificially increasing levels of aggression, all effects that would, of course, prove very beneficial in a high-octane game such as rugby.

It is not unknown that rugby is a highly demanding sport, both physically and mentally. Players face gruelling training regimes, are put under extraordinary pressure, and must perform in order to stay in demand. It isn’t really much of a surprise that some players look to artificial assistance to take on the highly demanding lifestyle. Plus, cocaine leaves the body faster than some other drugs, and can be out of the system in just a week, leaving players clear for doping tests. It doesn’t take much to see how the drug has crept its way into the game.

In a statement, the president of Toulon, Mourad Boudjellal, declared that as far as he is aware cocaine is very popular among certain rugby clubs. A rather damning statement that should not be taken lightly, given the recent events involving the arrest of Williams and O’Connor.

The arrest of Williams and O’Connor made headline news in France, with many fans of the sport up in arms over what they see as a lack of preventative action from sports officials. Although nothing has been announced yet, there have been rumours that tighter regulations may be put into place for French rugby players. What will become of Williams and O’Connor remains to be seen, but needless to say they won’t be making any appearances on the rugby fields any time soon.