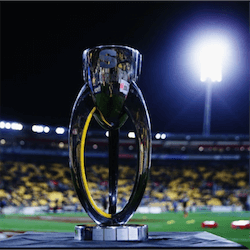 Controversy has hit the Super Rugby finals match between the Lions and the Crusaders. Jaco Peyper, a South African referee has been appointed as the official ref for the finals match, a decision many Kiwi fans disagree with.

South African fans have been up in arms that there would even be a suggestion that the referee‘s ability to be impartial should be questioned.

Last weekend Peyper was the referee for the Lions v Hurricanes match and he made a very controversial call for a foul on Beauden Barrett which debatably lead to a turn of the Lions fortunes. The team was down 29-22, but during Barrett’s time in the sin bin, the Lions clawed their way to a 39-29 lead and eventual victory.

It has been mentioned that last year Glen Jackson, a New Zealander officiated over the Lions v Hurricanes final without complaint.

Meanwhile the New Zealand Rugby Chief Medical Officer has raised his concerns regarding the fact that the Crusaders will be playing an away game for the finals. The team will be facing a 16 hour travel time.

This is down to a flawed schedule in this year’s Super Rugby matches which resulted in the Lions not playing a single New Zealand side in their Super Rugby run.

NZ Rugby medical chief, Ian Murphy stated that due to the effects of jetlag, when the two sides meet on Saturday, the Crusader’s body clocks will be set to 2am. The Crusaders team will be attempting to manage and mitigate the effects of the jetlag with sleeping pills, melatonin and hydration.

The Loss Of A Legend

Unfortunately this controversy has overshadowed the loss of former All Blacks Captain, John Graham. He passed away aged 82 and will be sorely missed in the world of Rugby.

He played for the All Blacks between 1958 and 1964. During his tour of South Africa during the height of its apartheid era, Graham was appalled by what he saw and boycotted the Springbok tours in 1981.

Graham had stints as a coach, radio commentator and a professional pundit. He also spent time as the chancellor of the University of Auckland and was voted New Zealander of the year by North and South magazine.

He was also made patron of the Auckland University Rugby Club. After a long battle with cancer in recent years, Graham finally succumbed. Support, praise and sadness followed the announcement from fans and luminaries of Rugby. Many people turned to Twitter to voice their condolences and to share memories of the great man.