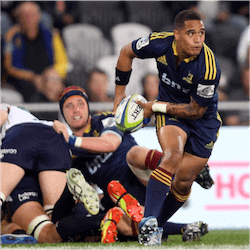 Crusaders Create a Splash in Christchurch

The Highlanders left the pouring rain of Dunedin only to find themselves in a similar state just 10 minutes into the Crusaders match. The driving wind, bucketing rain and miserable conditions created a game that was never going to be much of a contest. The Crusaders not only adapted to the conditions, but seemed to thrive in the veritable mud bath that left the Highlanders looking like a bunch of schoolboys flopping about on the pitch.

With the competition down to the final four teams, the Crusaders will have a keen sense that this really could be their year. It has been a long while since the Crusaders had the home advantage in the playoffs; and if the stats are anything to go by, they might just have a shot. Since 1996, the home side in the playoffs have won 80 per cent of the time. There is also the fact that teams would be playing in Christchurch, a city whose weather is extremely hostile in mid-winter to say the least.

Even if the conditions are not as bad as they were on Saturday, Christchurch is not a ground that works for teams who like to play wide with pass and catch games. This type of play suits the Crusaders just fine. They are a team that love to get stuck in and slug it out. Their short game was incredible with perfect line-ups, grinding their way forward, every chance they go. The Crusaders got their kicking right as well with Richie Mo’unga, Israel Dagg and Bryn Hall all having a good day with the boot.

The Crusaders also did a lot of tackling, which actually was one of their major strengths in the game. But their ultimate weapon as we saw on Saturday was their scrummaging. In the right conditions, the Crusaders can crush any team, and with wet and slippery conditions, being able to scrum for penalties is a must. The Crusaders have perfectly adapted to the wet conditions of winter rugby and will no doubt be hoping the rain continues.