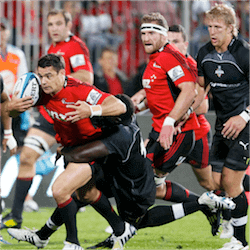 The match that New Zealand rugby union fans will want to put a bet on this weekend is Sunday’s Crusaders-Waratahs clash in Sydney. Currently top of both the New Zealand Conference and the tournament ladder with 21 points, the Canterbury side is also one of only three teams undefeated after five weeks of Super Rugby, along with the Chiefs on 19 points and the Stormers on 17.

At the time of writing, the Chiefs and the Stormers were still gearing up for their fifth matches of the tournament, against the Bulls and the Cheetahs respectively; so either or both could be ahead of the Crusaders by Saturday night.

Barring Upsets, Crusaders Should Have the Edge

Sunday’s clash, however, is the sixth match in 2017 Super Rugby for both teams. The Crusaders will be feeling the pressure of playing in the Allianz Stadium; they haven’t won an away match against the Waratahs in the past five years of Super Rugby.

So, despite their undefeated 2017 run so far, even considered against the Waratahs’ three losses and mere eight points on the table, a victory for the Canterbury team isn’t as assured as it looks on paper. They will, at least, be bolstered by three veteran players who were in the side the last time they beat the ’Tahs in Sydney, in 2012: Luke Romano, Matt Todd and Owen Franks.

With the Australian side taking a huge risk by putting in rookie fly-half Mack Mason to face one of the championship’s most formidable teams in his debut Super Rugby match, the Crusaders must be the favourites on seasoned talent, Super Rugby record and current form alone.

The Sharks, like the Stormers, are currently on 17 points, so a five-pointer against the Lions in Johannesburg on Saturday would also send them to the top of the table. With the Lions currently on 19 points, a win would automatically see them surge ahead, too.

Of course, by Sunday the Bulls and the Cheetahs may already have provided two convenient upsets, leaving the Chiefs and the Stormers no further up the table. But it seems much more likely that come Sunday, the Crusaders will be fighting to overtake two, if not three other sides, if they are to retain their overall lead.