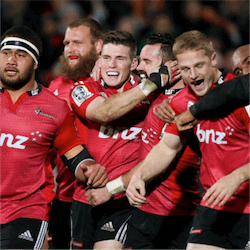 Since winning their last title in 2008, many Crusaders fans have been wondering when the former champions will win their next? This season, it seems like the more telling question would be which team has what it takes to actually beat them in a single game. After going up against the Cheetahs last Sunday, the Crusaders have extended their lead at the top of the table with an impressive seven try victory.

Their performance in Bloemfontein against the Cheetahs highlighted yet again their explosive attacking capabilities of the team with at the backline getting in on the action. This coming weekend, the Crusaders face off against the Bulls in Pretoria but will most likely face a more serious challenge when they return to Christchurch to take on the Hurricanes.

The Hurricanes were cooling their heels this past weekend but will be back in action this Friday to take on the Stormers. If any team has what it takes to match the offensive power of the Crusaders, it is the Hurricanes. In all likelihood, the match will come down to defence more than anything else. In that case, Scott Robertson should be feeling fairly confident about his chances.

In the match against the Cheetah’s, the Crusaders fielded an impressive back three of George Bridge, David Havili and Seta Tamanivalu. George Bridge managed to repeat his hat-trick seen a week before against the Stormers while Havili notched up a double. While the Cheetahs were heavy on the counter attack, they had their hands full with the Crusaders trio who were given room to run thanks to the skills of Richie Mo’unga.

With All Blacks skipper Kieran Read recovering from a broken thumb, his replacement Whetu Douglas has moved to the Italian club Treviso, prompting the Crusaders to bring in the more than competent Pete Samu. While the Crusaders were overambitious at points during the Cheetahs, game, they created a wealth of finishing chances and looked like a cohesive unit for the bulk of the game.

The bonus point against the Cheetahs put the Crusaders four points above the Chiefs on the ladder. However, the game was not as clinical as the team would have liked. Aside from the injury to Read, Sam Witelock was sent off for the final 10 minutes and received a citation for elbowing Cheetah’s prop Charles Marais. After being tackled in the air, Whitelock struck out in frustration, a move the lock should be disappointed with after having such an impressive season so far.