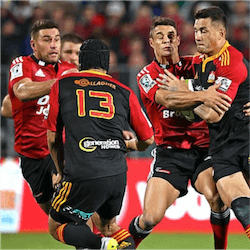 After eight weeks of Super Rugby, the Crusaders have got the attention of New Zealand’s online betting fans. The Canterbury side is the only team left undefeated in the 2017 Championship after seven matches, and they currently top the New Zealand Conference, the Australasian Group and the tournament ladder, with a total of 31 points.

Friday’s match against the Sunwolves was the Japanese side’s first time in Christchurch’s AMI Stadium. It will not be a happy memory: the Crusaders slaughtered them 50-3, with a hat-trick from Manasa Mataele, who was one of six New Zealanders to cross the Sunwolves’ line.

When the previously unbeaten Stormers went down 29-16 to the rampant Lions in Cape Town on Saturday, just a week after the Stormers themselves had ended the Chiefs’ unbroken winning streak, it left the Crusaders the only side with a spotless record in the 2017 tournament.

Super Rugby pool stages continue until mid-July, so the Christchurch side has a long road ahead if they are to hang on to the tournament lead. The Chiefs and the Hurricanes, with 29 and 28 points respectively, are challenging hard for the top of the New Zealand Conference, and all three look likely to make the quarter-finals.

The Hurricanes beat the Blues 28-24 at Eden Park on Saturday, while the Chiefs beat South Africa’s besieged Cheetahs 41-27 in Bloemfontein. The Blues now have 17 points after three wins from eight, while the Highlanders come off a bye week with four from seven and 18 points.

In the remaining pool stages, New Zealand betting enthusiasts will be watching the battle between the Crusaders, Chiefs and Hurricanes for the conference top spot, as well as the jostling between the Highlanders and the Blues to secure the final Australasian Group wild card into the quarter-finals.

In the South African Group, the Lions win puts them at the top of the ladder on 28 points, above the Stormers on 26. But with the Sharks on 22 and the Jaguares on 19, the three teams that go through to the final eight from this group are far from decided.