Crusaders Take On Highlanders In Playoffs 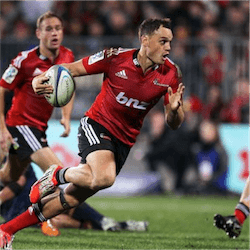 The Crusaders will be thinking back to their two wins over the Highlanders as they prepare for their crucial Super Rugby quarterfinal this Saturday in Christchurch. While on paper it is a matchup between second and seventh, the Highlanders have enjoyed a winning streak of late. Despite how this, Crusaders assistant coach Leon MacDonald feels that previous matches will count for little when the teams run onto the field.

To put it into perspective, the highlanders have won ten out of their last eleven games. They also have a point to prove against the hosts who just barely scrapped through the southern derbies in the regular season. In Dunedin, the Crusaders were trailing 27-6 before a flurry of late tries got them through the match with a 30-27 victory.

The Crusaders continued their run of narrow escapes when Mitchel Hunt booted a 47 meter drop goal in the dying moments to give the home side a narrow 25-22 victory last month. According to MacDonald, the playoff will most likely see a similar result. Speaking to the press, MacDonald said that if the previous two games are anything to go by, the quarterfinal is sure to be a filled with drama and a real cliff hanger.

It’s All About Discipline

He believes his team is ready to for what is ahead. It is all about getting out on the field and getting the job done, something the crusaders failed to do when they lost to the Hurricanes 31-22 in Wellington. Despite losing their perfect record and dropping to second in the overall standings, the former All Blacks fullback has full confidence in his team.

MacDonald should be more concerned with the team’s lack of discipline and focus at crucial moments in the game. This was the hallmark of their success at the start of the season when they recorded their 14 straight wins. MacDonald admitted that his team gave away too many penalties and when they did have the Hurricanes under pressure, they gave them an easy out. The importance of discipline is not lost on MacDonald and it is something her is certainly going to be working on before Saturday’s match.

Both teams are expected to be at full strength for the clash. The All Blacks who were rested for the Hurricanes match should be back in the front row for the Crusaders while Ryan Crotty should be back in after recovering from a hamstring injury.