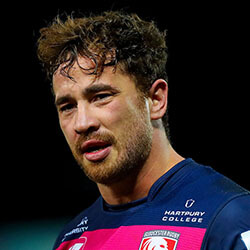 Gloucester-based fly half Danny Cipriani has been given the Premiership Player of the Season award for his efforts so far this season. The 31 year old has already claimed the Rugby Players Association’s annual award earlier in the month, making him the second player of all time to win both awards in a single season after Wasps’ Jimmy Gopperth in 2017.

Sale’s Faf de Klerk, Northampton’s Cobus Reinach, Saracen’s Alex Good, Bristol’s Steven Luatua, and Exeter’s Matt Kvesic were all nominated for the same award, but ultimately lost to Cipriani. Mark McCall of the Saracens won the Director of Rugby of the Season award after he led the North London club to their third European Champions Cup title, and is set for a Premiership semi final play off against Gloucester.

Cipriani has been an important part of their revival of the Cherry and Whites during his first season at Kingsholm, where he assisted more tries than any other player within the Premiership and led his side to take third place. Talking about the award, Gloucester head coach Johan Ackerman stated that they had to adapt to the style of the team, along with the coaches involved, and that he could only speak highly of Danny’s commitment to their team. Ackerman was also nominated for the director of rugby award alongside Bob Baxter of Exeter, Chris Boyd of Northampton, and Pat Lam of Bristol. He added that Danny has made a serious impact on the field.