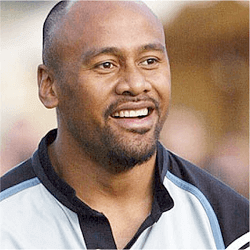 A recent fundraiser dinner was held in London to help raise funds for the children of rugby legend Jonah Lomu. The successful event reportedly managed to raise over ten thousand pounds equating to 177 600 NZ Dollars. The fundraiser was organised by a legacy trust after failing to raise sufficient funds in New Zealand to supports Lomu’s two sons Dhyreille and Brayley.

The former All Black rugby legend died a year ago at just 40 years of age after struggling with nagging health issues and a severe kidney condition. After his death, it emerged that the ruby star was in dire straits financially with almost no money to his name. It was reported that he was continually leaning on friends and local supporters to carry him through each month. After his death, many supporter including two former All Blacks set up a legacy trust to help support his children.

The dinner held in London was a sweeping success for the trust, raising a significant amount of money for the children’s future. The black-tie event attracted a star-studded attendance of some of the biggest names in international rugby. Showing their support for the legendary All Black, players continued to pour into the event including Martin Johnson, Michael Lynagh, Zinzan Brooke, Justin Marshall as well as a good number of players from the England National Team.

Speaking to the press, David Jones, one of the trustees, hoped the dinner would establish a good base for the trust. He said the aim was to establish a corpus, which is a term to describe funds that are used to generate interest. He explained that the trust failed to generate the desired funds in New Zealand, which triggered the idea to hold an event in London.

The idea is to continue to hold specialised events to create a corpus that will be sufficient enough to carry Lomu’s children right through to adulthood. The dinner held in London was marketed with promotional material stating that it was to celebrate the life and career of Jonah Lomu and help raise funds for his two children. Aside from ticket sales, funds were raised by auctioning off memorabilia gifted to the trust. This included Jonah Lomu’s 1995 World Cup squad cap as well as his 50th Test Jersey.