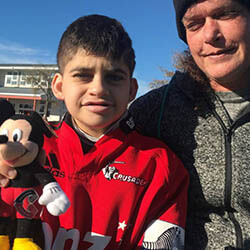 A young disabled Crusaders fan is thanks to the generosity of his community experiencing his biggest dream come true.

14-year-old Levi Aplin may live in Hurricanes-country, but that doesn’t mean he’s any less passionate about his ultimate team, the Crusaders. And thanks to the generosity of others, young Levi last weekend lived his own personal aspiration when he got to watch his beloved Crusaders play on their home turf.

Levi does not know how much time he has left in the land of the living, but he surely forgot about all of his personal challenges when he finally got to see his heroes play. The young boy’s dream came true thanks to the good work of several organisations and individuals in Wairarapa, who had joint hands and resources in order to create the trip for Levi and his siblings to visit the South Island to watch his favourite team take on the Hurricanes in their mind-blowing Super Rugby Aotearoa match.

Levi is disabled from having been born with the rare life-shortening genetic disorder Coffin-Siris syndrome. His condition presents the young boy with several challenges, including dwarfism, abnormalities of the heart, and autism.

To make matters even more difficult for the young super-fan, he was recently also diagnosed with end-state kidney disease. Now requiring daily dialysis in order to stay alive, Levi Aplin battles a daily fight between life and death.

The road trip to Christchurch may not have saved his physical life, but it certainly did warm the young fan’s heart no end. Not only did Levi get to see his heroes play on the actual field, but he also got to enjoy a special meet-and-greet organised by a Crusaders member of staff.