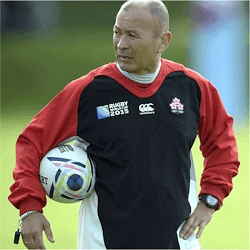 Eddie Jones has branded the Wallabies as the team showing the most improvement in world rugby, but is still confident that England will triumph thanks to the fact that they will be cleverer tactically when Sunday’s Twickenham face-off begins.

Jones’ pre-match verbal provocations are gathering steam, but his compliments on the Wallabies’ enhanced game were rich as he stated that their game had vastly improved since their 3-0 trouncing at home by the English rugby team in June, as the international season kicked off.

After complimenting their improvement, he went on to say that their performance all the way through the Rugby Championship and then on the tour they have undertaken has been inspired, specifically mentioning the variation of their attacks. He went on to state that their alignment is far better in terms of their attack, and that the decisions the team is making as far as defences are concerned have been impressive as well, mentioning that key players’ returning was good for the team as well.

Jones mentioned Will Genia specifically, calling him an outstanding player and stating that, at his best, Genia was probably the finest halfback the world has ever seen. Although Jones admitted that he was possibly not playing at his former level, he was nonetheless playing an excellent game, and that his influence on the Wallabies as a team was a solid one.

Jones admitted to being very impressed with the Wallabies’ game overall, and that although they did not manage to finish an uncommon grand slam of wins over the home nations when they were defeated, albeit narrowly, by Ireland over the weekend, Jones cautioned that their motivation would nonetheless remain through the ceiling when one considered the discomfiture they suffered at the hands of the English rugby team back in June.

Eddie Jones referenced comments made by Pep Guardiola, the Man City manager, who, when talking about playing Burnley, mentioned that, when a team gets beaten by a big score, the focus they will put on the next game against the team that won will be far more intense.

Jones agreed with Guardiola that the team who suffered the loss will be far more motivated both physically and mentally, and that it was up to England to ensure that their will to win could see them through.