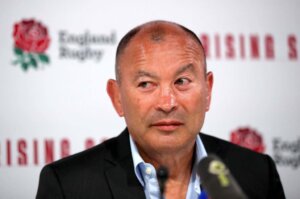 Ever a study in gentlemanly modesty and perfect decency, English rugby head coach Eddie Jones has dismissed words of praise following his having agreed to take a 25% pay cut to his annual $1.34 million pay parcel. It was no “grand gesture”, said a slightly embarrassed Jones as he tried to play down the gesture of selfless goodwill during an interview with RugbyPass.

Jones also killed off speculations about whether he had been willing to agree to a massive pay cut because of his intention to work in the NRL, which would effectively mean his leaving England behind. He had no intentions of applying for the Bulldogs job, said Jones. Instead, his focus is 100% on England until 2023 – i.e. the next Rugby World Cup.

Jones does however describe himself to be a “mad-keen” rugby league fan even today, having grown up alongside the Ella brothers while closely following the South Sydney Rabbitohs. Not to mention that player agent Matt Desira has revealed having held discussions over a possible future with Jones coaching the Bulldogs.

Some of Jones’ friends have even described rugby league as an “itch” Jones is positively dying to “scratch”.