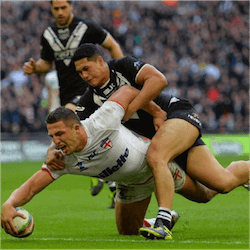 Getting To The Bottom Of Things in the Kiwi Camp

It’s sad but it’s a fact:  the Rugby League World Cup is over for the Kiwi’s.  And what a dismal and half-hearted attempt it was.  As was to be expected and rightfully so, an investigation panel has now been appointed to determine exactly what went wrong this time around.

Because it’s obvious that a lot has gone wrong this time around.

The panel consists of sports barrister Tim Castle (who will also be acting as chair) and former chief of New Zealand Netball, Raelene Castle.  The idea is to examine the teams, the individual players and their performance, or rather lack thereof, as well as coaches and the make-up and dynamics of team management.

The preparations and planning for the 2017 Rugby League World Cup will also be examined closely, as well as the resources that were committed to the world cup campaign, both from a human as well as purely financial point of view.

David Kidwell will not be exempt from the investigation either, including how he came into the position of being the coach of choice to be preparing the world cup squad.  Game plans and player logistics are all bound to reveal interesting behind the scenes dynamics.

New Zealand Rugby League chairman Reon Edwards has welcomed the appointment of the panel of truth, saying that everyone was disappointed with the Kiwis’ recent performance and that it was most necessary to understand exactly what went wrong and to which extent if the same mistakes and results are to be avoided in the future.

Edwards confirmed that one of the main topics of discussion would be the current coaching eligibility rule.  The rule dictates that the national coach must be a New Zealander.  It’s becoming more and more obvious that this is obviously a rule that is no longer effective.

Tim Castle has said that both he and his co-panellist felt very privileged to be undertaking such a responsible task and that the idea was to really get behind things by being independent and rigorous in their review of the situation as a whole.  The panel’s findings are set to be announced in February / March and will include a four year plan that has been in process for the last eight months.

The main idea is to work out a way towards better outcomes for the game and the team as a whole and is expected to be positive criticism at best.