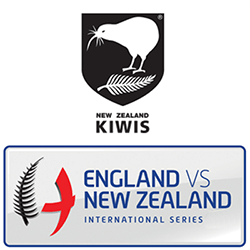 Tommy Makinson earned three tries in a row for England as the team moved up from eight points behind their opponents to beat them 20-14 during the second rugby league Test, taking a 2-0 lead in the three-match series.

England claimed four tries in total, with Jake Connor crossing the Kiwis’ line more than once as the hosts managed to pull clear in the second half after both were level at 6-6.

England, coached by Wayne Bennet, came from behind twice to win as New Zealand captain Dallin Watene-Zelezniak lead from the front. Connor put them up 2-0 through a penalty awarded for Kiwi prop Jesse Bromwich, who made a late tackle on Sam Tomkins. The visitors struck back just minutes later when Watene-Zelezniak came through between Olive Gildard and Tomkins for the first try of the match, and Shaun John’s conversion pushing it to 6-2. England spent the first of the first half defending, but a pass from George Williams allowed Makinson to make into the corner for another try.

Four minutes into the second half, New Zealand claimed another try, and with another penalty kick from Johnson left New Zealand in the lead 14-6. But England fought back, and Makinson grabbed a second try, and after a conversion and set-up try by Conner, Makinson’s side-stepping run saw him take his third try of the game, which was converted by Tomkins, and pushed England ahead of the visitors to win the game.