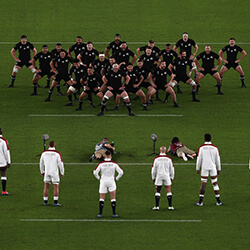 England have been given a 2000 Pound fine for crossing over the halfway line as they took up a V formation to face the haka before the start of their Rugby World Cup semi final game against New Zealand. World Rugby rules stipulate that teams must remain within their own half of the pitch to receive the challenge from their opponents. Referee Nigel Owens and his team had to push several England players back as they strayed over the halfway line.

England ultimately won the game 19-7 and are set to take on South Africa for the final. World Rugby stated that England had breached the tournament rules that relate to cultural challenges. Steve Hansen, coach of the All Blacks, said that he thought the response from England had been fantastic, and that they didn’t get fined for responding, but rather for crossing over the halfway. He added that the haka requires a response, and that it’s meant to be a personal challenge and requires that the team respond to it directly.

In 2011, the French team had formed an arrowhead line up and advanced on the New Zealand team while they performed the Haka before the World Cup final that took place in Auckland, and received a similar fine for breaching a culture ritual protocol. England broke away from their usual shoulder-to-shoulder stance and decided to take up a V shape, with two prongs pointed out toward the All Blacks in order to receive the haka.