England vs. All Blacks will have to wait until 2018 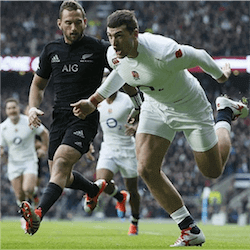 No England /All Blacks Clash this Year

The big showdown between England and the All Blacks will have to wait until 2018 after it was announced that the World Champs will play the Barbarians at Twickenham on the 4th of November. England Coach, Eddie Jones has confirmed reports that the Rugby Football Union were pushing to arrange a match between the New Zealand and the Six Nations Champs instead.

But for rugby fans, the clash of the titans will have to wait. The English Rugby Union’s governing body has approved the match between the All Blacks and the Barbarians after the NZRU insisted that the All Blacks wished to fulfil the match agreed upon at the end of the year. The Barbarians released a statement saying that they had approached the RFU last month requesting the fixture at Twickenham. The request was subsequently granted, replacing the Barbarians scheduled match against Australia.

England will now have to wait until November 2018 to get a crack at the World Champs. The approval of the Barbarians match means that the teams will have no chance of meeting any time this year. The last time England faced off against the All Blacks was in 2014 at Twickenham. New Zealand won the tightly contested match 24 points to 21.

Some England players will however get a chance to face off against the All Blacks as part of the British and Irish Lions Squad later this year. The Lions are scheduled for a three-test series tour against New Zealand in June and July. England managed to equal New Zealand’s record of 18 successive Test Victories when they defeated Scotland. After the match, the RFU reportedly approached NZRU about a possible matchup between the two teams on November 4th.

England’s record equalling win over Scotland saw them keep hold of their Six Nations title and gave them a chance to make history. The team were unable to break New Zealand’s record though as they went down 13-9 to a fired up Irish side in Dublin last week. Strangely enough, it was the Irish too that ended New Zealand’s victory run in November when they defeated the All blacks 40-29 in Chicago.

England are due to play Australia as well as Samoa and Argentina later in November this year while the All Blacks are set to play the Barbarians in a celebratory match that marks the 125th anniversary of the union. After the big match against the famous invitational club, the All Blacks can then focus on their European tour which sees them playing tests against Scotland, France and Wales.