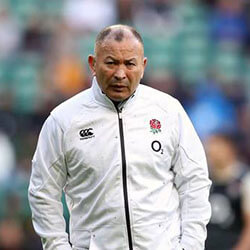 England coach Eddie Jones feels that his team finished off stronger than New Zealand after a long and drawn-out match that saw world champions New Zealand win 16-15 at Twickenham during hard rainfall.

England had initially surged ahead of their opponents, claiming a 15-0 lead midway through the first half thanks to tries from hooker Dylan Hartley and right wing Chris Ashton.

But the All Blacks changed rebounded by scoring their win 16 points with fullback Damian McKenzie’s try in the 39th minute that was supplemented by Beauden Barrett’s conversion, and two penalties on either side, the fly half’s first in 71 Test matches.

England, who were missing 17 players due to suspension and injury, were convinced that they had won the game with just four minutes left when flank Sam Underhill cross for a try after Courtney Lawes had taken down TJ Perenara’s kick.

Veteran French referee Jerome Garces ruled that Lawes had been offside and dismissed the score, ending England’s bid for an eight win in 41 Tests against the All Black. Despite the loss, Jones told reporters that he believed the team had played exceptionally well, especially during the final 20 minutes of the game.

Centre for New Zealand, Sonny Bill Williams, might have to miss their next game against Six nations champions Ireland due to an injury he suffered during the match, while England are gearing up to take on 2019 World Rugby hosts Japan at Twickenham.