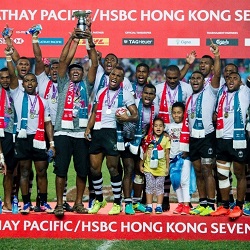 Fiji is hell bent on taking their 4th consecutive title as the HSBC Sevens series heads into Hong Kong. There are 40 teams taking part in the tournament but Fiji has made it clear that they are in it to win it, and are out for glory.

Over the course of 3 days the 40 teams will compete for the title and this event also doubles up as the 2018/19 Sevens series qualifier, so it’s even more important. He qualifiers see 12 men and women’s sides go head to head, and the action looks set to be intense.

With the Commonwealth Games kicking off next week many of the Sevens teams have sent their side, as they rest u their top players and keep them in great from. But Fiji has its number one side ready to play and this clearly underlines their commitment to the home of the Sevens. They are desperate for a 4th win in So Kon Po and are not concerned by the Commonwealth games or any of the team’s taking part strategies.

Fans will be thrilled to hear that despite teams like Australia and South Africa sending in their A team rather than their first, other countries not partaking in the Games have stepped up to the plate and want to offer Fiji a challenge. USA, France, Spain, Russia and Argentina are all out for blood too, and are hoping to pip Fiji to the post and knock them off their stride.