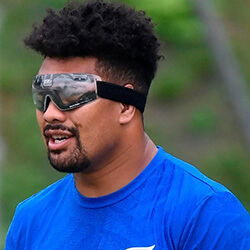 All Blacks flanker Ardie Savea will be wearing protective goggles for the team’s upcoming Rugby World Cup match that will see them facing Canada. The decision for the player to start using goggle comes after he discovered that the vision in his left eye has deteriorated and realised that he needs to protective his eyesight. Talking to reporters, the player said that a couple of years ago he noticed that he bad vision in his left eye, and that everything is kind of blurry. He added that he told the team’s doctor, Tony Page, that it had been getting worse, and that they are now doing something about it. He continued, stating that the doctor told him that World Rugby had some goggles that had been approved, and that he just has to get used to them.

Earlier in the year, World Rugby approved the use of goggles at all levels of rugby in a move to allow those that are visually impaired to take part in the sport. The approval came after extensive development and trialling of appropriate eyewear. The type of goggles that Savea will be using have been approved by World Rugby, are designed to be safe forth both the player that is using them, as well as any players that they will make physical contact with.

Savea will be following in the footsteps of Italian player Ian McKinley who was the first international player to wear protective goggles in the sport.