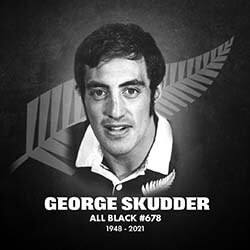 Former All Blacks winger George Skudder, and the uncle of three more New Zealand national side players, has died. He was 73. New Zealand Ruby confirmed the legendary player and NZ Army major’s passing on Tuesday. Skudder passed away at his home in Te Puke, Bay of Plenty.

Skudder was but a 23-year-old college student when he was first picked for his sole test against a touring Welsch side back in 1969 at Eden Park. The legendary player was picked as replacement for an injured Graham Thorne and made an immediate impact on selectors when he crashed through an attempted tackle by JPR Williams before scoring his side’s first try in their 33-12 victory.

The majority of Skudder’s career as a rugby player would sadly been hampered by injury during the years that were to follow. He did however still manage to absolutely shine for New Zealand Maori and Waikato before going on to being selected for the 1972-73 All Blacks Tour of Britain and Canada. He competed in 13 matches over the course of that significant tour.

Skudder over the course of his illustrious career as a player scored an impressive 38 tries across 67 matches played for Waikato, New Zealand, and New Zealand Maori. He spent a total of four years as part of the New Zealand national side – between 1969 and 1973.

Skudder was the uncle of three All Blacks stars – with his nephews Nehe Milner-Skudder, Ben Atiga, and Tanerau Latimer having all worn the black for New Zealand.