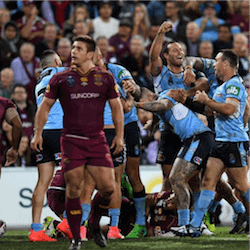 It seems Queensland’s dynasty is still alive thanks to the efforts of Thurston who suffered through fifty minutes of agony to help his team stun the Blues with a 18-16 win in the State of Origin game II. In front of an 80 thousand strong crowd, the mighty Blues had the shield in their sights, thwarting a second half attack by the Maroons. Going into the dying stages of the match, the Blues led 16-12 and were just minutes away from claiming the series.

However, the Queensland team refused to be downed and conjured one of the greatest escapes in in the history of the competition. Dane Gagai was the man set the wheels in motion, booting a sectional cross try to level the scores with just two minutes left to play. It was all left up to Thurston to do the conversion and save the Maroons from doom. With the stadium holding its breath, Thurston held his cool, nailed the sideline conversion and levelled the series.

While this may have been just another good performance by the big man, for the Maroons it was nothing short of a miracle. Halfway through the game, Thurston injured his shoulder but refused to surrender. Inspiring the rest of his team, Thurston held the match and the team together culminating with the conversion that sealed the match.

The sterling effort by the Maroons means that the two teams will meet for a thrilling decider on the 12th of July at Suncorp Stadium. Whether Thurston will be there is a different story. It will be a race against time for him to be fit enough to play in what would be his final game for Queensland.

With New South Wales dominating game 1, Queensland’s strategy was to strike early. After nine minutes of back and forth play, the Maroons quickly shifted the ball to Boyd who released to Holmes on the edge for his maiden try. However, three quick tries in the 14th, 24th and 27th minute put the Blues back on top and in a position to take control. It was the Maroons never say die spirit that got them through in the end. With a double from Gagai in the 52nd and 78th minute, Queensland were in with a chance and holding out for Thurston to do his magic.