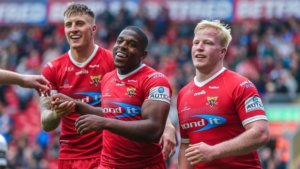 The Huddersfield Giants have ended their four game winless series with a strong display a 36-18 victory at Salford Red Devils. The Giants were trailing 8-0 after early Tyrone McCarthy and Ken Sio tries, but Innes Senior and Matty English were able to secure a 10-8 lead at the break. Darnell McIntosh pushed the score up to 14-8 and Kris Welham had scored for his team, further scores from Kruise Leeming, Jake Wardle, and Ukuma Ta’ai gave them a 30-12 lead.

A try from McCarthy have Salford hope but McIntosh pushed through to earn another try at the 78th minute. Overall, the Giants ran in 36 points over a period of 50 minutes, and pulled through with a second successive defeat on Salford following their recent loss at Wigan. Head coach of Salford, Ian Watson, stated that his team had shown a lack of intent, and the side will remain seventh in the Super League roster having missed the opportunity to advance to fourth with their latest game.

Watson, talking about the loss, stated that defensively they were not good enough, and that right from the beginning they had the sense that they were not going to win. He added that it was a big game for them, but the league is pulling them back, and that there were too many things off and the players didn’t compete at their usual standard. Coach Simon Woolford, on the other hand, saw his side win for the first time since May.