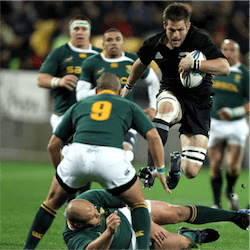 All Blacks To Face An Improved Springbok Side

Prop Kane Hames has been called up to be part of the 15-man starter squad for the All Blacks ahead of Saturday’s clash with South Africa at Albany.  Hames will replace an injured Joe Moody – the 29 year old being one of eight key changes to Steve Hansen’s side of champions after the recent stand- off with Argentina at Yarrow Stadium.

Hames starting ahead of the more experienced Wyatt Crockett has been criticised by some and widely considered to be a chancy move.

The Springboks, who have been improving steadily with every game, are bound to push the wobbly move as far as possible, especially considering that this will be Hames’ very first start.  Whether the placing of Hames was a strategic move on the part of Steven Hansen or merely a shot in the dark isn’t yet clear but may very well have been driven by the knowledge that the Boks will be making do without a number of key players as a result of injuries.

Another returnee to the pack of starters is Sam Whitelock – effectively replacing Luke Romano.  Romano had not even made the bench as Scott Barrett has been deemed a more preferable choice.  More changes are afoot as Ryan Crotty moves into the place of Anton Rienert-Brown.  Crotty will be starting out as outside centre alongside Sonny-Bill Williams.  Sam Cane, in turn, will be playing his 48th test as Ardie Savea moves to the discomfort of the bench.

If recent history is anything to go by, the Springboks will have their work cut out for them as they face New Zealand on Saturday.  The rivalry between the Boks and the All Blacks has been dubbed the most prominent in the history of rugby union.  Of late it has sadly been a slightly lop-sided affair with South Africa not having performed quite up to the standard that the world has become accustomed to.

The Boks and the All Blacks have faced each other in a total of 93 tests.  Of these, South Africa has managed to win only 35 – with three games having ended in a draw.  This puts the Boks at a dismal win-ratio of 38% – hardly a rivalry to write home about anymore.

In fact, since the 1995 World Cup – when Francois Pienaar’s men beat the All Blacks in an emotional final at Ellis Park – South Africa has only won 14 matches out of a total of 51.

Still – the fact that a Boks loss on the weekend will serve to secure a possible championships title for New Zealand – speaks volumes as far as South Africa’s rugby prowess is concerned.