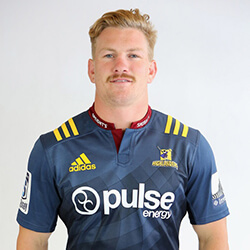 The Highlanders have appointed James Lentjes as their new acting captain, with Ash Dixon and Aaron Smith taking over roles as vice captains. 28 year old flanker Lentjes had a good Super Rugby campaign for the 2019 season and will be taking over from last season’s co-captains Luke Whitelock and Ben Smith, both of which have since moved on to play in France. The new captain was part of the previous season’s leadership, and is regarded by many as a smart and strong leader who was able to overcome injury problems to take control of the Highlanders No 7 jersey for 2019.

Lentjes also revealed that he had been in discussions with senior members of the Highlanders’ playing group where he was looking for feedback before going on to confirm with Aaron Mauger that he would be accepting the new role. Talking about his appointment, Lentjes stated that the team had been supportive and gave him the confidence that they were in his corner. He added that they were happy for him to become captain, and that it’s a one-man job in terms of the captaincy itself, but that his team mates will be able to influence the decisions that he makes in the future.

The flanker had been offered the role of captain by Mauger last month, and he first decided to seek the opinions and thoughts of his fellow teams mates, which had reinforced the final decision made by the head coach.