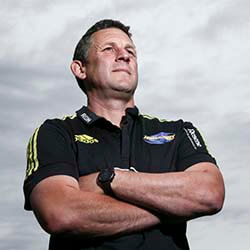 Head coach Jason Holland will remain in charge of the Hurricanes for two more years. Holland recently extended his contract with the franchise and will remain at the helm until the close of the 2023 Super Rugby season.

Holland initially joined the club’s coaching team as an assistant coach in 2015. He however stepped into the head coach vacancy left by John Plumtree in 2020.

Also signed for an extended two-year period is assistant Hurricanes coach Chris Gibbes. According to Hurricanes chief executive Avan Lee, the fact that both men had agreed on two-year extensions is good news for the franchise. Lee said the pair had formed a powerful and fantastic relationship ever since starting to coach the Hurricanes together.

Gibbes, who joined the club in 2020 following a super successful run as head coach of the Wellington Lions, said he was very much looking forward to spending his first season coaching Super Rugby. What he enjoys most about Super Rugby Aotearoa is the fact that it’s such a challenging competition to be involved in, said Gibbes following the extension announcement. He also added that Holland’s leadership style and vision for the team had made the decision a natural and easy one.

Holland does indeed have a great vision for the group heading into 2021, and said he was expecting great things from the talented club for this year as well as beyond. He said he felt privileged at having been offered the opportunity to spend two more years with the team.