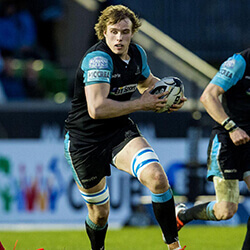 Scotstoun Stadium is set to be the host of the Pro14 semi-final between the Glasgow Warriors versus the Scarlets. The attendance capacity at the venue has been increased from 7500 to 10000 in anticipation of the match, which looks to be one of the most popular of the season.

Jonny Gray, a native to Glasgow, has told reporters that he believes that the team’s fans are enough to push the Warriors through the semi-final and on to victory.

“it’s really exciting; there’s going to be more of our fans,” Gray has said. “They’re crazy and when you get to meet them they’re just good people. So you feel a real sense of pride when you run out here, especially being from Glasgow and for the guys coming in, they feel proud they are playing here. You can hear them throughout the game and they come and support us wherever we go. When you go out on that pitch, you represent more than yourself, so you want to make them proud. Scarlets are playing some really good rugby when you see what they’ve done in Europe and in the league.”

While the Warriors have seen more than a few successes this season, having won 10 of their home league matches, they didn’t fare so well against the Scarlets during a game in Llanelli, where the Scarlets won 26-8.  How the game between the two long-time opponents plays out is yet to be seen.