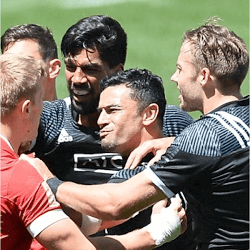 After a rather spirited tournament played in South Africa, the New Zealand Sevens rugby team took home the bronze. In a tense match that had the crowd on their feet for stretches at a time, the Kiwi team narrowly lost out on a semi final to South Africa, before beating Scotland to claim the bronze.

An injury time try helped New Zealand to a dramatic 24-19 win over the Scots. However it was their impressive performance against South Africa in their earlier match that really helped the team restore some of the credibility they seemed to have lost in their series in Dubai. Sadly though, the Blitz Boks proved to be just too much for them and they came unstuck, losing 14-7, despite gaining an early lead thanks to a try by Sherwin Showers.

A Day of Drama

South Africa’s victory against the Kiwi’s on home soil wasn’t unexpected, and it seems that the Blitz Boks are far superior to the Springbok national team that’s become a bit beleaguered in recent times.

New Zealand placing third was by no means the end to the day’s drama, as the English team who had hammered New Zealand in the pool stages upset the home team by snatching the final from them 19-17! England had been in the lead at half time and even after South Africa had managed to level up to a 12-12 score after the beginning of the second half, they just couldn’t close the deal.

A try by Ruaridh McConnochie and a conversion by Tom Mitchell pushed England to their 19-12 lead, and the Blitz Boks simply couldn’t catch up. This was despite South Africa scoring what may have been the equaliser in the last minute, but they just missed the conversion, leaving them minus the top place title.

Kiwis Pull Out the Stops

To secure their bronze place, New Zealand had to pull out all the stops. The Scots started off with a feisty try by Dougie Fife and in retaliation, Kiwi Dylan Collier scored to even out the score at 7 all. Scotland seared ahead with another try by George Horne but the Kiwis again responded with converted try, putting the half time score at 14-12.

After half time the action got even more intense and New Zealand was ahead at 19-12, before Scotland roared in from behind and let Ruru seal a victory, right at the last minute.