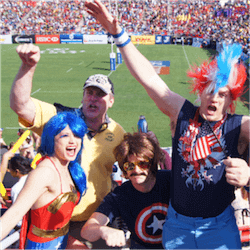 Sports punters and rugby enthusiasts will soon have something to celebrate as the US leg of the HSBC World Rugby Sevens series kicks off in Las Vegas. Taking place from the 2nd to the 4th of March, the Las Vegas Sevens tournament is the 5th in the series after Dubai, Cape Town, Sydney and Hamilton. The tournament is scheduled to be held at the Sam Boyd Stadium in Las Vegas Nevada and is guaranteed to be one of the most exciting events in the series.

For those who are new to the Rugby Sevens, the HSBC World Sevens Series consist of 10 legs played in countries around the world. After Las Vegas, the tournament heads to Vancouver in Canada, then Hong Kong, Singapore, Paris and London. A sevens match consists of 2 halves, each seven minutes long with seven players on each side. The rules of the game are similar to that of Union rugby.

At each tournament, teams are awarded points in relation to where they finish. The winners of the leg receive 22 points, runners up, 19 points and 3rd place 17 points. The 2017 World Rugby Sevens Series was dominated by the South African team who won 5 of the 10 legs while taking second place at 3 more legs. This gave them an unassailable lead of 192 points, a full 28 points ahead of runners up England. Fiji finished in 3rd on 150 points while New Zealand finished in 4th on 137 points.

What to Expect in Vegas?

This year, South Africa has continued their impressive performance winning the Dubai Sevens series, placing 3rd in Cape Town, 2nd in Sydney and 2nd in Hamilton. They are the log leaders at the moment with 6 tournaments still to play. The New Zealand team has started strong this year, placing second in Dubai and winning the Cape Town leg. They are currently in second spot, 8 points below South Africa.

Looking ahead to the Las Vegas Leg, South Africa were victorious in 2017 and will be looking to make it 2-for2. Fiji finished 2nd in Vegas last year and are also looking strong in 2018. New Zealand will be wanting to keep up their momentum this year with a new training regime and tactics to employ in upcoming games.