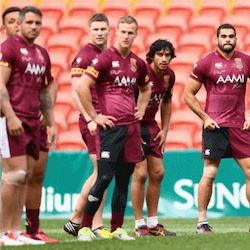 It’s been revealed that the Queensland team has dropped a selection of bombshells, and that the team that takes to the field at Sydney’s ANZ Stadium will look rather different to what was originally expected. The changes come hot on the heels of the Maroons 28-4 roasting in Origin I.

Changes to the Team

It has been revealed that the changes are a follows:

Corey Oates has been axed from the left wing. This is despite his strong show in the season opener, and he move has shocked many fans and his teammates too.

Sam Thaiday got a nasty surprise just before his 33rd Birthday. He was also unceremoniously dumped, thus ending his rather glittering 29 game Origin run.

Justin O’Neill lost his centre spot after he failed dismally to muzzle Jarry Hayne in the first round of the series.

Gavin Cooper has been recalled at age 31.

Veteran props Jacob Lillyman and Nate Myles have both been dropped fro the squad, although Myles may still get a reprieve if newly debuted Jarrod Wallace gets suspended for an illegal shoulder charge.

Test flyer Valentine Holmes is all set to make his debut on the right wing, and the Maroons coach is hoping he’ll add some desperately need spark to the position.

On Sunday night the Maroons hierarchy met to finalise their three quarter line and it was understood afterwards that Billy Slater would return to the Number 1 jersey, and that Darius Boyd would replace Oates on the left wing. Will Chambers is expected to get Dane Gagai as a centres partner and this will clear the path for Holmes, giving him a chance to don his maiden Maroons jersey.

Of all the changes to the Maroons, it seems that the culling of Oates is the biggest shock, as he was nothing short of inspirational in Origin I. he ran for 138m and produced a superb AFL-style mark, scoring Queensland’s only try, but it seems that for Walter’s, this is not enough to keep him around.

The chop of Thaiday was also unexpected, and he was clearly hoping to make his 30th State of Origin appearance, but now hi dream lies in tatters.