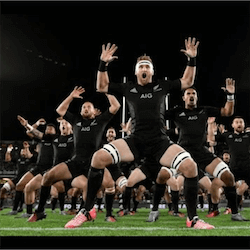 Manu Samoa has officially announced its 23-man squad for Friday night’s clash against the All Blacks. The highly anticipated match at Eden Park will see eight new players donning the famous blue jersey for the Samoan side. Of the eight new arrivals, former Crusader, Kieron Fonotia will be the only player to feature in the starting line-up. The test match is set to be an exciting affair as it marks the first official match of both the New Zealand and the Samoan international rugby season. It will give both sides a good indication of how their team is performing and where to focus their training.

The match will also provide the All Blacks with a chance to get in some game time before they take on the Lions in the upcoming three-game series. Kieron Fontotia will making his debut appearance for the side alongside Stade Francais player Paul Alo Emile. Auvasa Falealii, the Auckland halfback will also be expected to be called on from the bench.

While there will be a lot of new faces in the team, the Samoan side will have a full set of established players to balance out the newbies. The only two players missing from the Friday’s line-up are Reynold Lee-lo and David Lemi who will sit this one out due to injury.

A Chance to Prove Their Worth

Speaking to the press, Manu Samoa’s coach Namulauulu Alama Ieremia said that the addition of so many debutants were in response to the side experimenting against the mighty All Blacks. Alama Ieremia said that he wanted to put on a performance that would make his nation and his team proud. According to him, their performance against the All Blacks on Friday will be a good indication of where the team is at the moment.

He reiterated that there was no better challenge than playing the number 1 ranked side in the world. He believes that the match will provide insight on how his team is performing and offer the ideal opportunity to build momentum before the June/July Internationals. Of the 23 players in the squad, no less than eighteen play for clubs in the UK and France. Only five players in the Manu Samoan squad are based in the Southern Hemisphere. Of these, Tim Nanai-Williams is the only player who is involved with Super Rugby.