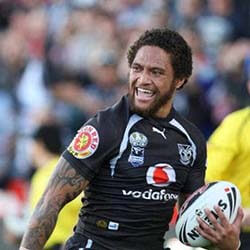 Retired rugby league star player Manu Vatuvei has ousted himself as the sportsman facing several charges related to the importation and possession of methamphetamine.

The ex-Warriors stalwart has denied all charges associated with his involvement with the Class A drug. The charges were laid against him in December 2019.

Vatuvei recently, only days before his name-suppression was about to lapse, took to social media to reveal himself as the high-profile athlete previously rumoured to have been involved in an action to keep his identity concealed in relation to drug charges. He told his fans and followers about the allegations in a video on Instagram, saying he had wanted to get something off his chest for a while now, and that this “something” had been weighing heavily on him for quite some time.

According to Vatuvei, the charges laid against him are all merely accusations and that he plans to fight to prove his innocence by way of a court appeals process. He also added that he’s well aware of the fact that there will be a lot of questions begging to be answered, but that he had been advised by his legal team about what to reveal at this early stage.

He also asked for privacy for his family and himself while working through the legal process.

The former Warriors star was once the pride and joy of New Zealand rugby, having played a staggering 226 games for the Warriors and 29 test matches for the Kiwis.

If convicted of the charges laid against him, Vatuvei could face a lifetime sentence behind bars.