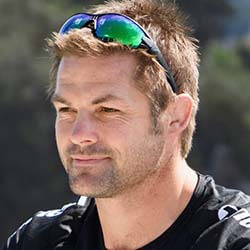 Ex-All Blacks captain Richie McCaw says he’s considering taking legal action against a company that has apparently without his permission been using his name for endorsing a CBD product. Wife Gemma McCaw recently shared an image of the “Richie McCaw CBD Gummies” to her social media account on Instagram, warning people not to purchase the product as the All Black great had not endorsed it as falsely advertised and claimed.

Gemma McCaw furthermore said as part of her post that it has come to the couple’s attention that husband Richie’s image and branding has been used to sell the product to New Zealanders, and this had been done without the couple’s endorsement or permission. She said the couple vehemently opposed the company “taking money” from people in New Zealand and prompted people to share her post in the event that they happened to know someone who had already purchased the product.

McCaw’s agent, Dean Hagan, has in the meantime confirmed that the former All Blacks skipper is indeed wanting to take legal action against the culprits. Hagan said that the website advertising the CBD product was however an overseas site, and that the task of identifying a responsible contact had been daunting thus far.

Hagan also explained that he hoped that people would perform their own due diligence before purchasing the product. If they did, they would immediately realise that McCaw had actually put his name behind it, he explained.

McCaw was recently named sportsman of the decade at Auckland’s Halberg Awards.