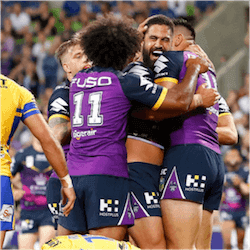 The Melbourne Storm recorded their fourth record-equalling Word Club Challenge title with a well-deserved victory over the Leeds Rhinos at AAMI Park. While the Super League Champions had plenty of fire, they were simply no match for the Australian Champions who dominated from 10 minutes in to close out the game with an impressive 38 points to 4.

Boosted by the return of stand-off, Joel Moon, Leeds stunned the hosts with some enterprising paly in the opening minutes to take an early lead. However, with the absence of 4 senior front-rowers, the Rhinos were forced to submit to the superior skill of the Storm. Leeds also had the bad fortune of losing full-back Jack Walker to injury before half time as well as loose forward Stevie Ward.

Leeds Started Well but Were Dominated by The Storm

Melbourne did not escape injury either with full-back Billy Slater gong off with a shoulder problem while Cameron Munster happily ran on in his place. The Storm should be impressed with just about every one of their players, especially rookie scrum-half Brodie Croft who’s inspired performance looks to be taking the side into the post-cooper Cronk era in spectacular fashion.

Despite the roar of the home crowd and the nerves, the Rhinos showed impressive skills early on. Running in a penalty from in front of the posts, the Rhinos made a brave decision which paid off when Ryan Hall was handed a beauty of a cross to land the Game’s first try.

A Rough Second Half for Leeds

Unfortunately, that is where it ended for the Leeds. The Storm were quick to respond and overwhelmed the visitors with 3 quick tries and a penalty. If the Rhinos believed there was any way back, it was quickly squashed early in the second half when Nelsson Asofa-Solomona barged his way over the line. By the time Felise Kaufusi planted the 5th try for the Storm, it was no longer about trying to win for Leeds, so much as trying to limit the extent of the damage.

All credit to the Rhinos who played full-tilt till the final whistle. This was plainly evident when second-rower, Brett Delany managed to get back and pull off an incredible try-saving tackle on winger Josh Addo-Carr. In the end the Leeds made could not find any way to build on their solitary try while the Storm happily cruised to their fourth win.