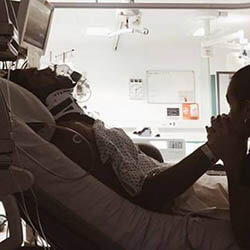 Tatiana Fatialofa has reached out to her husband Michael’s supporters on Instagram, sharing a lengthy message in which she pleads for them to keep him in their thoughts and prayers.

The 27-year old Kiwi has been ensconced in a London hospital since he was carted off the field in a neck brace during the Worcester Warriors’ Gallagher Premiership game against Saracens on Saturday the 4th of January. He was involved in a serious collision during the game, which his team ended up losing as well, and play was halted for 15 minutes as medics rushed to the pitch to treat the struggling athlete.

He underwent surgery on Monday the 6th to relieve pressure on his spinal cord caused by swelling, and while it was a successful operation, Fatialofa remains in a stable but serious condition. He is still in intensive care, but the process of recovery can be said to have begun.

The Warriors released an update on Monday saying that Nick Tait, their team doctor, has been in daily contact with Fatialofa’s neurosurgeon. Apparently the trauma he received during the game left the player with reduced power and sensation in both his arms and his legs, which is why the surgery was necessary.

The Auckland-born player is currently in his second season at Sixways Stadium after he left the Wellington-based Hurricanes Rugby Union team in 2018. A full recovery is on the cards for the 27-year old, but strict rest and recuperation will no doubt play a large role in how quickly he’s able to get well.